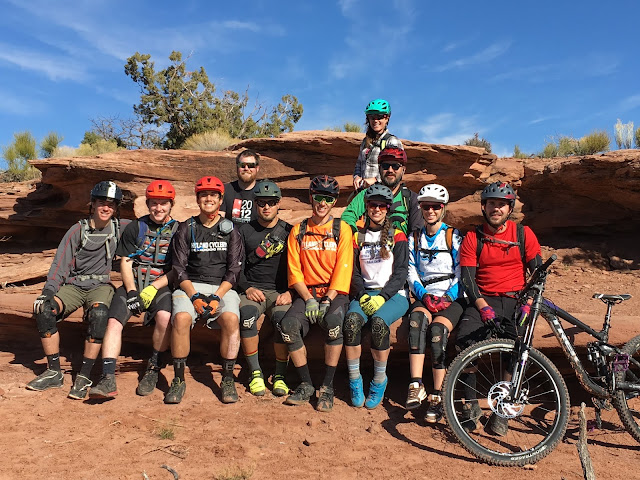 The bike business is good. During the busy summer months we work hard and sometimes those long hours can take up valuable time on the bike. To thank our awesome employees for working those hard hours it has become our yearly tradition to take them all to Moab for a weekend of fun. This past trip was full of adventure, smiles, and good memories.

A small group of us (Steve, Carson and Julie) headed to Moab Saturday morning to get some early riding in. We arrived in Moab and were surprised to see a dusting of snow on the edge of the mesa. Everybody was determined to not let a little snow slow the fun times down. We quickly met up with Franklin and Kyle at Moab Springs Ranch to unload the cars and plan a ride. The sun sets at about 5:15 in Moab during November so we knew we had to hurry. The plan was set. Captain Ahab is where we were headed. 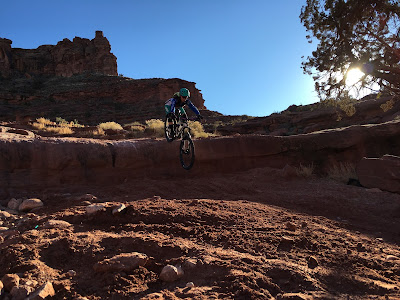 We started the ride down the Amasa back steps and had a small session on the final drop. We then worked our way slowly up Amasa back and Hymasa trails. The group moved slowly. Everyones legs were stiff from car rides and the feelings of winter in the air. The group reached the Captain Ahab halfway connector as the sun was starting to dip in the sky. We had to make a decision, turn around now or continue. The decision was made to split the group. Steve, Franklin, Carson and Kyle continued up to do a full Ahab loop while the rest turned and started making their way over to the downhill portion of Captain Ahab. The guys who did the full loop hustled the climbs and raced the descents. They made it back to the end of Ahab not too far behind the other group and just as the sun was setting. That evening everybody told Moab memories over pizza and beers while waiting for the rest of the shop's employees to show up. The stoke was high.

Sunday morning the plan for the day was made over pancakes and bacon. JR and Colby were going Dinosaur track hunting (read about Colby's adventure). Carter and Mark were heading to Arches to hike to Delicate Arch. The rest of the group packed up for Magnificent 7 shuttle with the plan to end at the world famous Portal trail.

Our large group started Mag 7 on the Getaway trail which was a little wet from the melting snow. Despite a little mud everybody was excited about the adventure ahead. We continued making our way down to Bull Run followed by Great Escape. Stopping for photos, feature sessions and snack breaks along the way. With 15 people in the group many breaks were necessary just to keep everyone together. The day ticked away as we worked our way down the mesa eventually we ended up at Goldbar near Gemini Bridges road where we ran into professional World Cup racer Mitch Ropelato. If you're not familiar with Mitch, he's probably one of the most naturally talented mountain bikers
and a genuinely nice person. As usual, he couldn't help but show off his skills on a bike by dropping off large slickrock shelfs, making it look too easy. After high-fiving Mitch we continued on Goldbar and quickly found ourselves climbing up the opposite mesa from Mag 7. Until this point the ride hadn't been too strenuous but the many breaks along the way had added up to a long day in the saddle. The climb up Goldbar was where the group started feeling the effects of the long day. After a hard push up the Goldbar Jeep trail the group made it to the overlook off the mesa. The views were nothing short of spectacular. We could see far into Arches and watched as the insect like cars moved along Highway 191 into Moab. After a much needed break everyone started slowly making the move along blue dot trail that followed the edge of the mesa towards Poison Spider and eventually Portal. Tired from a long day on the bike the group was moving slow and the sun was slowly going down. We made it to Portal just as the sun was disappearing. The Portal trail is not the ideal trail to navigate in little to no light. The exposure on a section of Portal is so severe that there is actually a sign stating "Dismount your bike! Riders have died here. Riders like you!". We made it just past the the danger before the darkness really started setting in. The final riders of the group had luckily prepared by bringing lights with them and slowly made it down the final technical portion of the Portal trail. PHEEWWW! Everybody made it off the trail safely. Later that evening everyone met up at the condos and traded stories of the day over burgers and drinks. The exhaustion soon settled in and after a short soak in the hot tub everyone skirted off to bed. 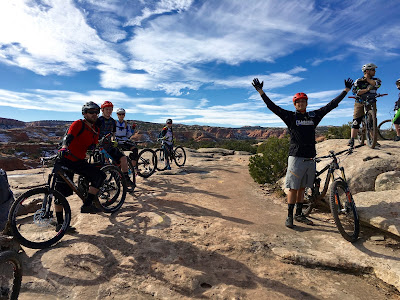 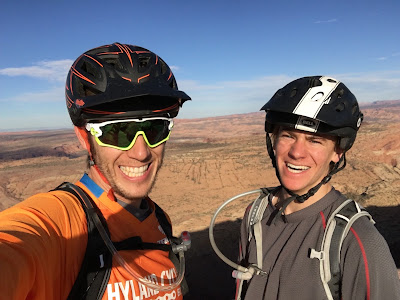 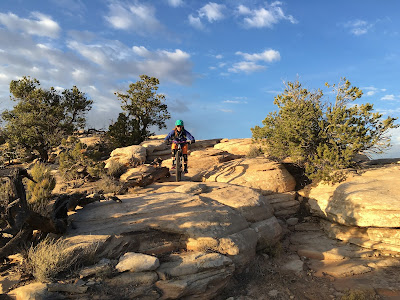 Monday morning everyone was moving slowly, still tired from the long day before. Breakfast burritos were devoured and the cars were packed for the drive home. The drive home was slow going due to the snow storm and thankfully, everybody made it home safely. Another great Moab trip was in the books, it was a great experience for all our employees. Riding bikes, exploring great trails and bonding with each other.

Cheers to the next year! 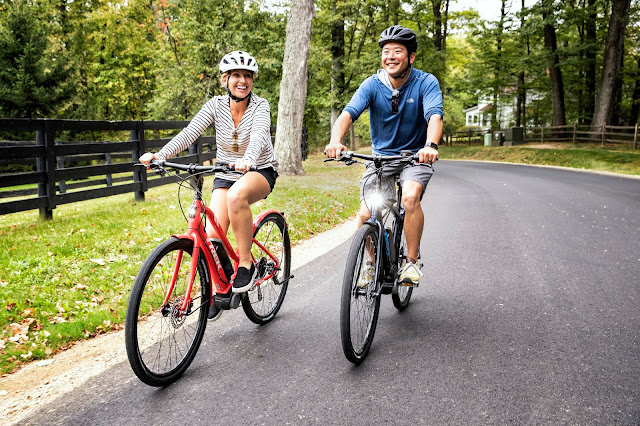 What are your excuses not to ride your bike? Huge hill in your neighborhood, you can’t keep up with others, its too hot outside, your body just can’t make it today? Electric bikes throw out any excuses you have not to ride. I am talking about pedal assist only bikes. These are bikes that have a motor and battery that you have to pedal for the motor to kick in. (I am not talking about any bicycle with a throttle.) Pedal assist bikes can take your riding to a whole new level that you never thought possible. They make riding fun again, and melt the hills away. TREK VERVE+ ELECTRIC BIKE Now we are going to talk about one of my favorite electric bikes, the Trek Verve+. We were personally so excited when Trek Bikes came out with the Verve + because we love the non electric Verve so much. It is the perfect bike to cruise around the Salt Lake City Valley. FEATURES The Trek Verve + is a great city, hybrid style bike. This bike is efficient, smooth, and a

Happy International Women's Day! Trek Bicycles Background Trek bicycle company has been around since 1976. They are one of the largest bicycle company's world wide. They have a huge team of researchers, engineers, and riders to help them lead the way in new bike technology. You will find better components on a Trek bike for a better price and amazing warranties that back up their bikes. These bikes are built tough, if you treat them right they will last a long time. Trek Supports Women Women in the sport of cycling is drastically growing. Support within the cycling community has a lot to do with this.  Trek does a ton for women cyclist. Trek focuses on sponsoring top women cyclist even more than the top men. This is a big deal and it is a huge step for women! Some of these athletes include:  Casey Brown, Emily Batty, Rachel Atherton, Tracy Moseley, Laura Trott, and Drops cycling team.  They also have women  specific programs to help grow the women cycling c 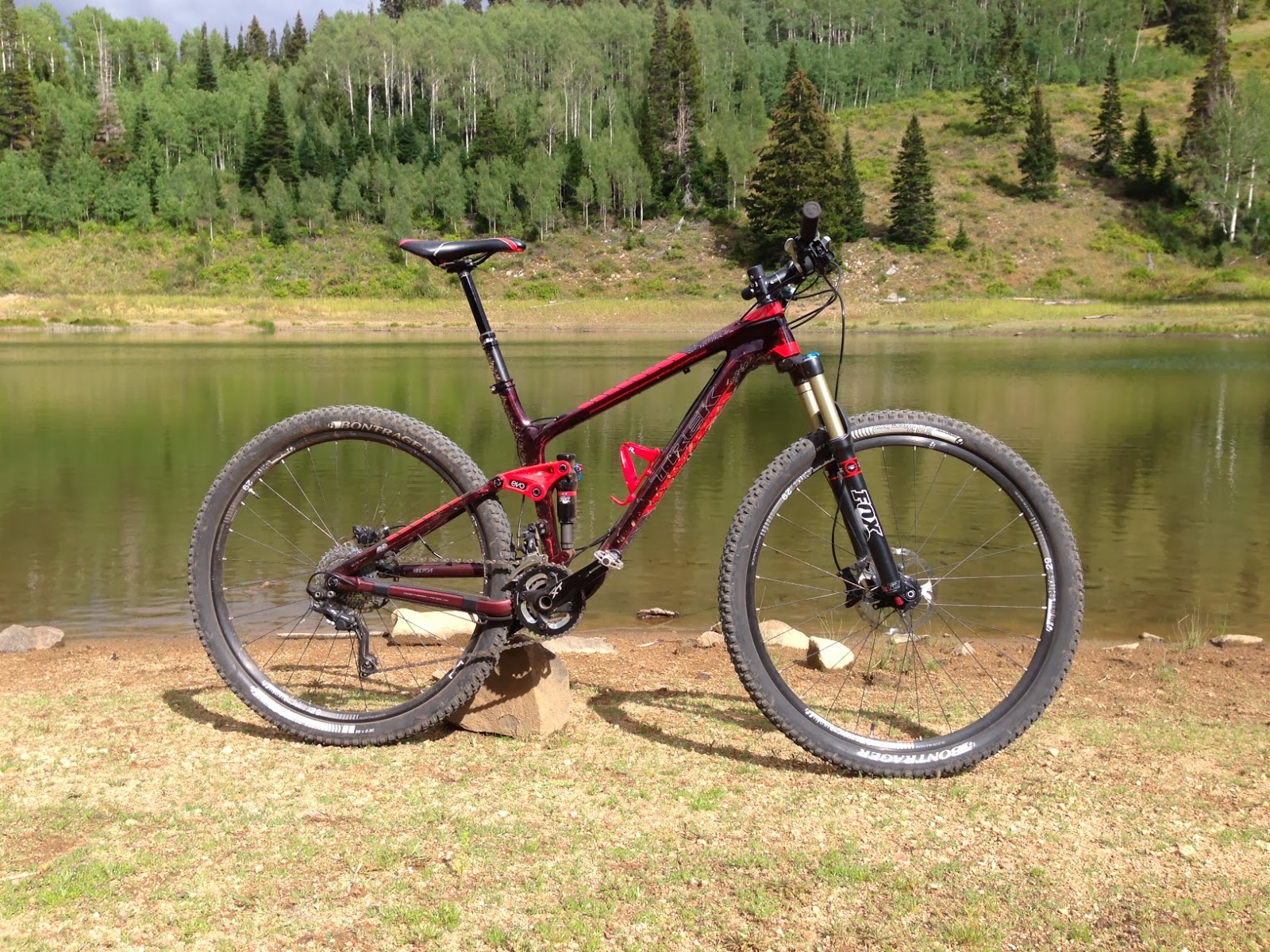 Over the past few years Trek's Superfly and Rumblefish 29-inch lines have gained quite the reputation as great cross country 29ers.  Both bikes are excellent cross country machines utilizing Gary Fisher's G2 geometry and swing link suspension design. As the 29er popularity has grown Trek realized the need to design a trail ready 29er with a more relaxed geometry and boost in suspension travel. This summer Trek launched the all new 120mm Fuel EX 29 and 140mm Remedy 29 29er mountain bike lines. The new Fuel EX 29 is Trek's first 29er that utilizes their 26-inch suspension technologies of Full Floater and ABP- combine this with G2 geometry and you have one amazing bike. Since the 29er's early release in June we've had our service manager Steve riding the new Fuel EX 9.8 29 on some of our great Utah trails and this is what he has to say: Over the past 6 years I've spent countless hours on Trek's 26-inch suspension platform and truthfully I haven't be